Back to all posts

Going Dual Source: Adding an Internal Mic to a K&K

I usually use dual source pickup systems, generally pairing an internal mic with some other source. In this post, I'll walk you through how I add an internal mic (an Audix L5O) to an existing K&K pickup in a Lowden O50. First, here's what we need:

For a stereo system, we need a stereo (TRS) jack. Luckily, the K&K pickup comes with a stereo jack, so we're all set. The simplest thing is to wire the mic directly to the endpin jack, but I like to use an 1/8 jack and plug, so the mic can easily be removed and swapped out. For example, for a loud gig, I might pop in a magnetic pickup instead of a mic.

So here we go:

1. Here's the K&K TRS jack and the 1/8 inline jack (ordered on Amazon), connected by a short bit of shielded cable I had lying around. The cable is soldered to the hot lug and ground of the 1/8 inch cable, and the sleeve lug of the K&K. The K&K jack is a switching jack, so it has the tip (the shortest lug) already wired to the K&K, a long lug, which is for a power switch, which we don't need here, and a medium lug, which is the sleeve - that's where we want our second source to go. So I solder the hot wire of the cable to that lug, and the shield to ground.

Here's a diagram of a typical stereo jack:

and here's how it looks in real life, wired up to the 1/8 mini jack: 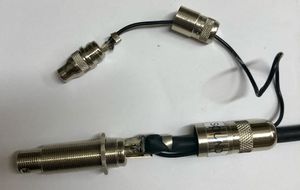 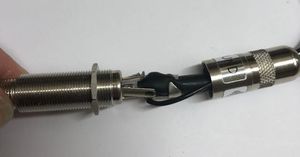 2. Now we'll prepare the mic. The Audix L5O comes with a mini-XLR connector. I could use that (I'd need an inline femail mini-XLR jack instead of the 1/8 inch jack), but it's overkill and the cable is too long anyway, so I'll cut the connector off, after measuring how much cable I need to reach from the soundhole, where I plan to install the mic, and the endpin jack on the guitar. I need to strip the cable and separate the wires. The L5O has a shield (ground) a hot wire (red) and another white wire, which would be used if we were sending balanced phantom power to the mic. For our purposes we will be powering the mic with a different scheme, called AB-power (also sometimes called "T-Power", which comes from the German word "Tonaderspeisung" - I'm sure you wanted to know that!), which only uses one wire (plus ground). The mic will receive 9 volts from a preamp on the red wire, and also deliver sound via the same wire. 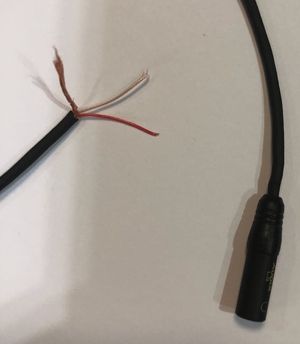 To make this work, I'll wrap the white (or sort of clear) wire along with the shield and solder them together, tinning the red wire while I'm at it: 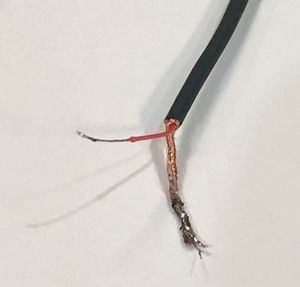 Then I solder the 2 leads to an 1/8 inch plug (I had this plug lying around, not sure where I got it, but here's a similar one):

I need to clean up those solder connections a bit and trim off the excess wire.

3. To mount the mic, I'll use a small wire clip (available thru Amazon) and a bit of foam left over from some packaging. 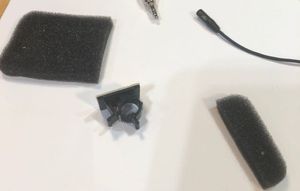 I just cut off a small strip of the foam, then wrap it around the mic, and stick it in the clip: 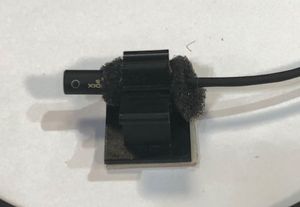 4. Back to the guitar, I tie the 1/8 and original K&K jack together with a pair of zip ties, and plug the mic in. 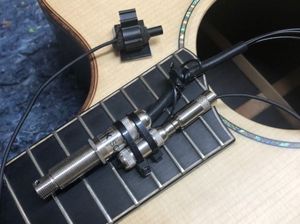 Now is a good time to test. Actually a better time would have been before I zip-tied everything together, but I was feeling confident. To test, we need a TRS cable, that has tip, ring, and sleeve: 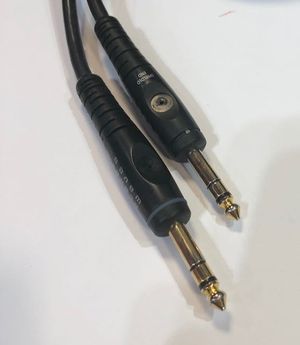 and a preamp that supports a stereo input and that provides power to the mic. I'll use the Sunnaudio stereo preamp that I had custom made, but there are many options. This preamp, the "MS-DY" was the prototype for the Sunnaudio MS-2 , another excellent choice. 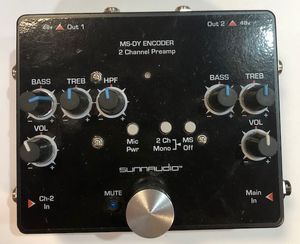 And of course we need an amp so we can hear what's going on. After plugging everything in, I tap on the mic and the K&K and make sure both are coming through. Here, everything worked! If it didn't, I'd need to check my solder connections. The most common problem is something getting shorted out in the tight quarters of the plugs and jacks.

5. Let's put everything back together now. I use a small dowel that I can stick thru the sound hole and that just happens to fit tightly in the K&K jack. If I recall, I got this from Ken Donnell of MinFlex mics, but take a spare jack down to the hardware store and you can probably find something to fit. Here's the jack inside the soundhole, stuck onto the dowel, and the dowel going in thru the endpin hole. Note the washer and nut threaded onto the dowel, ready to be used. 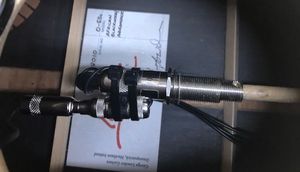 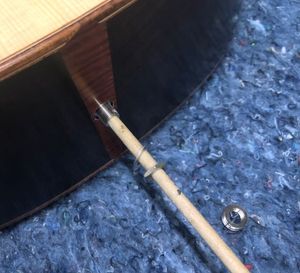 Now that I've pulled the jack out thru the guitar, pushed the washer in place and threaded the nut on, I can remove the dowel and tighten the nut using a 1/2 wrench (I got this nice compact wrench from Stew-Mac, I believe) and a small screw driver to keep the jack from rotating: 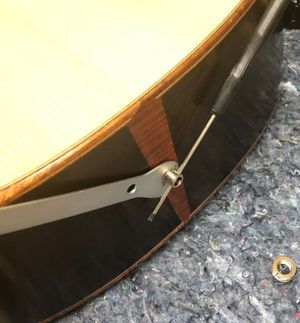 6. Mount the mic. I prefer the location right at the edge of the soundhole in the middle of the strings. Peel the double sticky tape off the clip and stick it on, as below (seen from inside the guitar, looking out the soundhole): 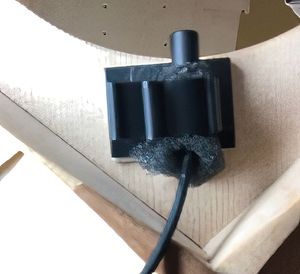 I have some excess wire, so I need to tack it down. I could use wire clips, but here, I'll use a bit of velcro, a trick I picked up from Teddy Randazzo of Dazzo pickups. Just sandwich the wire between two pieces of velcro, pull off the paper from one side and stick it inside where-ever it needs to go so that it doesn't flop around and rattle. I probably could have used a smaller piece. 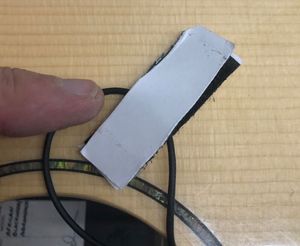 7. And that's it! Put the strings back on, plug in, and make sure everything's still working.  How does it sound? Let's check it out by recording a bit from the output of my pedal board:

Hear the Results - It's Example #3